Guro Christophe Verdot is originally from Bordeaux, France and has made a home in the Philippines to train in and teach the Filipino Martial Art of Pekiti Tirsia Kali. He was introduced to the system in 2010 by Mandala Eric Laulagnet who was working at the French Embassy in Manila at the time. Guro Chris began his training for few months at Pekiti Manila then switched to Kali Salcedo.

He established Pekiti Tirsia Kali Global City after recieving his Guro rank from Tuhon Rommel Tortal on May 06 2012 and reached the rank of Mataas Na Guro in september 2014. His dedication to training and promoting PTK have given Guro Chris many opportunities to meet and train with other established teachers in the Philippines and around the world. 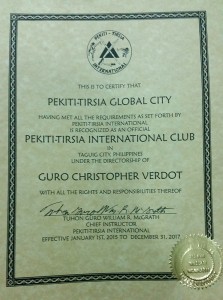 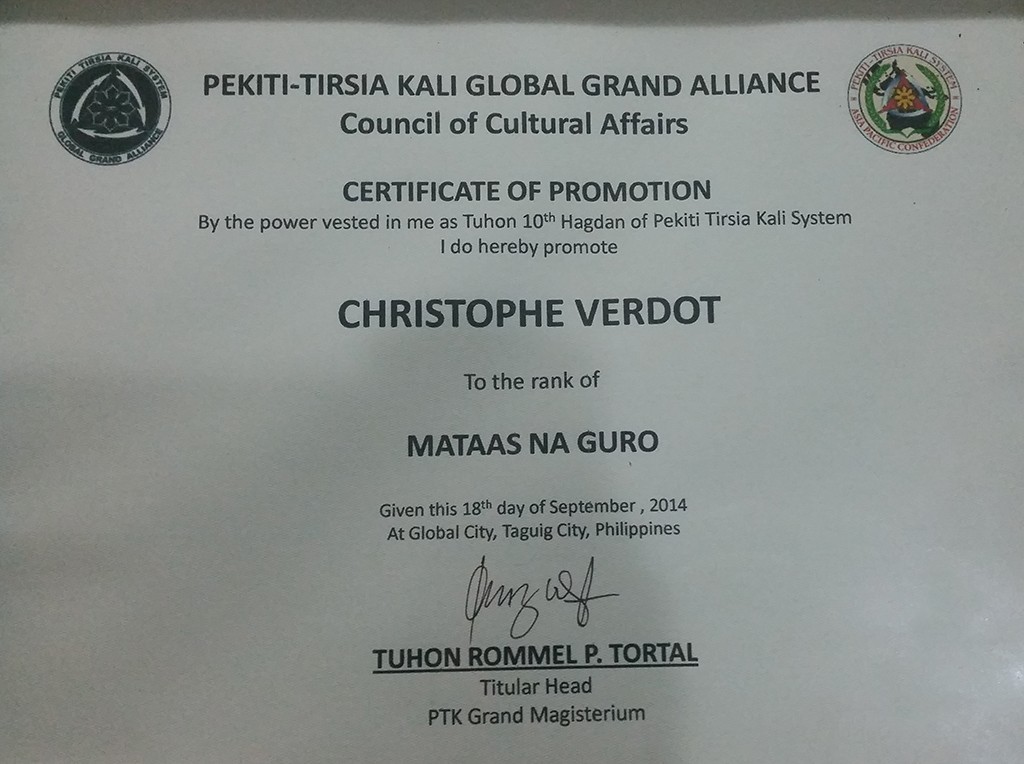 – Tuhon Rommel Tortal, who generously shares all aspects of his family’s system with Guro Chris during their weekly private training sessions. Tuhon Mel is the newphew of Grandtuhon Gaje and is the head of the PTK Global Alliance and the PTK Asia Pacific Confederation. He is also active in teaching and promoting edged and impact weapons combat to military and law enforcement units all over the world.

– Tuhon Bill McGrath, head of Pekiti-Tirsia International. In 1994 Grand Tuhon Leo Tortal Gaje promoted William McGrath to the rank of Tuhon (Chief Instructor), the first person outside the Tortal family to attain such rank in the Pekiti-Tirsia System. Tuhon McGrath is certified by the F.B.I. as a Police Defense Tactics Instructor and by the State of New York as a Police Firearms Instructor (pistol) and is a Life member of the NRA. Guro Chris is Certified Trainer under Tuhon Bill and is following his curriculum and organisation aside of training every years with him, on seminares, camps and private lessons.

– Mandala Kit Acenas, was the first teacher of Guro Chris and is the head teacher of Kali Makati where Guro Chris started his training in Pekiti Tirsia.

Guro Christophe Verdot is proud to have been able to train with some of the biggest names in the PTK community. He underwent an intensive Instructor Candidacy Course in Bacolod under Grandtuhon Leo Gaje, Jr., and has trained privately under Tuhon Nonoy Garucho. He has also attended seminars lead by Tuhon Leslie Buck, Tuhon Tim Waid, Tuhon Uli Wedle, Tuhon Nick Papadakiss, Mandala Eric Laulagnet, Mandala Apolo Ladra, and one of his role model, Tuhon Philip Gelinas from Canada of Dog Brothers fame.

It is his hope to continue training and expanding his skills so that he can share his knowledge with his students at PTKGC and around the world.

Bonifacio Global City in Taguig was named after Filipino hero, Andres Bonifacio, the father of the Philippine Revolution. It is a modern center of business, recreation, shopping, and living that was once part of the main Philippine Army camp in Fort Bonifacio. In-between high-rise condo and commertical buildings are areas of greenery where outdoor parks are being maintained.

Pekiti Tirsia Kali Global City was established by Guro Christophe Verdot in this highly urbanized district to cater to the many residents and employees of the offices and multinational corporations in and around the area. BGC is ideally situated in a central location that links North and South. Access points from the North and West is through Kalayaan Ave; from Makati via EDSA through McKinley Road; from the East via C5; and fromt he airport through Villamore Airbase to 5th Avenue.