How to grip a knife

Posted in News by Christophe Verdot on 04 January 2015

Here is a very interesting article from my teacher Tuhon Bill McGrath on how to grip a knife, the grip depend on the knife size and some others parameters but he explain that far better than me. This article was originally from a PTI newsletter, i also join here the related video on this subject, also by Tuhon Bill McGrath.

“WHAT IS THE BEST GRIP FOR KNIFE FIGHTING?”

I get asked that question a lot at seminars. I usually respond by saying “Well, show me your knife.” Which grip is best will depend on the knife. Both the blade and the handle play a part in choosing the “best” grip. Let me explain.
Here are some quick definitions of blade grips (at least the way I teach them):
There are two general categories: Forward and Reverse.

– Ice Pick grip. (Pakal in Pekiti-Tirsia) A reverse grip in which the bade is held 90 degrees to the forearm. With a single edge knife this can be held either cutting edge-in (facing the wrist) or edge-out. Which is best depends on the size and shape of the blade as well as the shape of the handle.
– Forearm grip. A reverse grip in which the back of a single edge blade rests against the forearm.
The way I learned to hold a karambit from Eddie Jaffri also falls into the category of Reverse grip, (just remember that there are some specifics to the use of this knife that don’t apply to a straight blade).

WHICH KNIVES GO WITH WHICH GRIP:

Hammer grip. Large, heavy knives best used for hacking or chopping (like large bowies or camp knives), are best used with a hammer grip. (Grandmaster Gaje used to say that for a knife to be used in Sak-Sak grip, the blade should be at least as long as the measurement from the student’s wrist to the tip of his middle finger. I’m 6’1” and this measurement gives me a blade length of 8 inches).

Thumb Support grip. My Cold Steel Voyagers are all lightweight knives with thin, Zytel nylon handles. Most people will find that if they try chopping in hammer grip with a knife like this the handle will move in their grip and the blade will not deliver 100% of its potential cutting power. The Voyager (especially in the shorter blade lengths) is a slasher rather then a chopper and you will find that you get a better cut from this knife if you hold it in Thumb Support grip. Most tactical folders will slash better with the thumb backing up the blade as well; because of their similarly thin handles. I have had friends in law enforcement whose chosen knife for their wives to carry was a Spyderco Civilian. I recommended the Thumb Support grip to them as being best for that model and the way it would likely be used (in armed defense by a beginner female against a larger, stronger, but unarmed male attacker trying to grab a limb, clothing or hair to gain control of their intended victim).

Fencer’s Grip: This is a commonly used grip for most pocket knives that have a locking blade. However, this is my least favorite knife grip, as it does not allow for the best hold on the knife handle. That’s why I prefer icepick grip for this size knife (if the handle shape allows it). If you hit something hard (like a bone) during a thrust when using a Fencer’s grip, the likelihood is high that your hand will slide up the handle and onto the blade, cutting yourself. Fencers do not encounter this problem because of the large guards on their foil, epee or saber (and they are using completely dull, supper lightweight blades anyway). A Renaissance era rapier is probably one of the few real swords one would hold predominantly in Fencer’s grip. Cavalry sabers, except for very light versions (like the model General George Patton designed), would have been used mainly in hammer grip.

Finger Grip: This is a good grip for thin weapons like pencils and pens. I have also seen it used with non-locking folding knives, fighting cock spurs, Indonesian coin knives and items as small as toothpicks.

Reverse grip: (AKA Pakal grip) Tactical folders and fixed blade knives with blades of 4 inches or less are better fight stoppers with a stab rather than a slash. Grand Tuhon Leo Gaje taught us that a knife should be used in icepick grip when its overall length is no larger than the span between the outstretched tips of the thumb and pinky finger. For me, that yields an overall length of 9 inches or a 4 inch blade with a handle of no more than 5 inches.
For a knife with a handle that fills your hand, you should press your thumb against your forefinger (as if making a fist), locking your grip. This is commonly taught as the first knife grip for Pekiti-Tirsia students simply because it is the best grip for the knives they usually carry (if they carried big bowie knives, I would teach them hammer grip first).

For a thin item like a pen or pencil, or a knife handle with no guard (like a Finnish Puukko) you should put your thumb on the butt of the pen or handle to keep it from sliding in your grip during impact. The need for the thumb support in this is type of grip with thin handles is the reason I chose tactical pens with plain tops (as opposed to DNA collecting crowns) for the tactical pens I sell on my website http://www.pekiti.com/ptistore/store.php.
If a single edged knife has a handle that does not allow for an edge-in Pakal grip (as when it has finger grooves) then an alternative is to hold the knife with the edge out. Just remember to practice counters from disarm attempts that try to take advantage of this edge-out grip (the same can be said of edge-in grip if winter temperatures in your area bring heavy winter clothing; making the edge-in grip less effective in countering disarms).

Forearm grip: This is something I learned in Penchak Silat for use with a golok. The technique I learned uses a golok with a heavy blade. The length of the blade should be such that, when held against your forearm, the tip of the blade extends just a bit past your elbow. For a guy my size, this means a 14 inch blade. The golok technique I learned uses very “sharp” elbow strikes paired with reverse grip slashes and is intended for an armed attack on an unarmed victim (the guy Eddie learned this technique from was an enforcer for an Indonesian gang).

I used a little bit of golok technique to illustrate the point that some techniques and grips are very weapon specific while giving a seminar in Germany several years ago. A student there asked why Pekiti-Tirsia practitioners hold a single edge knife edge-in when using ice pick grip.

I responded that a reverse grip slash with a small knife was almost useless with a straight blade and that it was better, when using a straight blade, to stab and that the edge-in hold was used to counter disarming attempts. To show them how ineffective a reverse grip slash with a small, straight blade was, I had them take the knives that they actually carried each day (knives with 3.5” to 4” blades), and had them slash a piece of drywall (gypsum board) left over from a construction job at the school, with their own knives held in icepick grip, edge facing out. One of the school’s owners (a big guy named Oliver) held the 4 feet tall by 2 feet wide piece of drywall with his hands gripping the top edge. One by one the students came up and slashed the drywall horizontally at about elbow height and found that they only cut through the outside paper layer for their efforts. One thing about drywall that I forgot however was that you only need to cut through the paper layer to get it to break. Another student came up to try his cut (you couldn’t have timed the next thing that happened better if you practiced for a month). As the student began to move, Oliver tightened down on the board breaking it in two, just as the student’s knife passed. You guessed it: Oliver’s hands dropped into the path of the blade. He was cut across the back of the fingers of the one hand at the second knuckle joints with the fingers bent (the worst possible position for the fingers to be in when cut). After a quick examination, I had Oliver flex his fingers and grip my arm. His grip was still strong and he said he felt no pain. He went to the hospital, get stitched up, and was back at the seminar later that day. I explained to the class that if a knife that the reverse slash technique was designed for was used (like a goIok), Oliver’s fingers would have been on the floor.

The knife itself determines which grip you will hold it in. Remember, there is no single “best grip” for all knives. 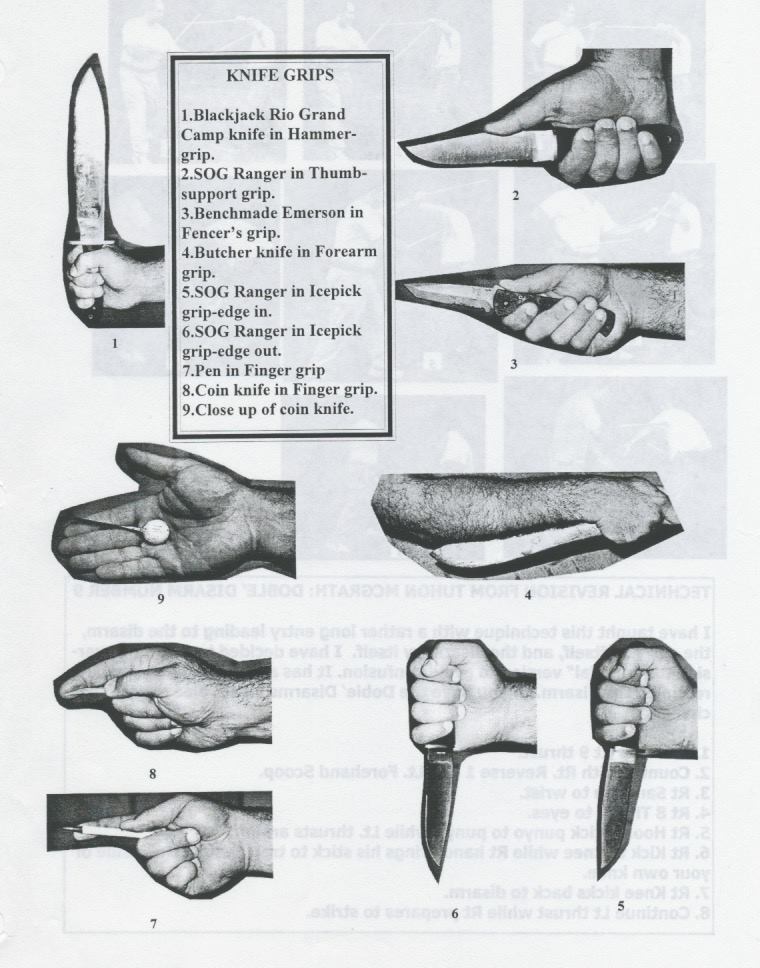